I was sat in the passenger seat, on the winding roads headed towards the bag check at Llanberis the night before the run. Around each corner, I could see it. The big f*cking mountain I’d been training months to tackle. This was it.

“ohhh, you’re in for a treat there fella…just don’t fall off aye?”

After 9 months of training, and clearing up 2 niggling but fairly serious injuries, I was ready to tackle Man vs. Mountain.  There were already hundreds of people queuing up at the kit check by the time I got there at about 5pm. The atmosphere was great. Everyone seemed pretty relaxed and there was a lot of joking around. People were even sharing out of kit to others that had forgot the odd bits and pieces.

I felt really good, and that nothing could knock my confidence. But there, in big letters on a white board at the entrance, read: 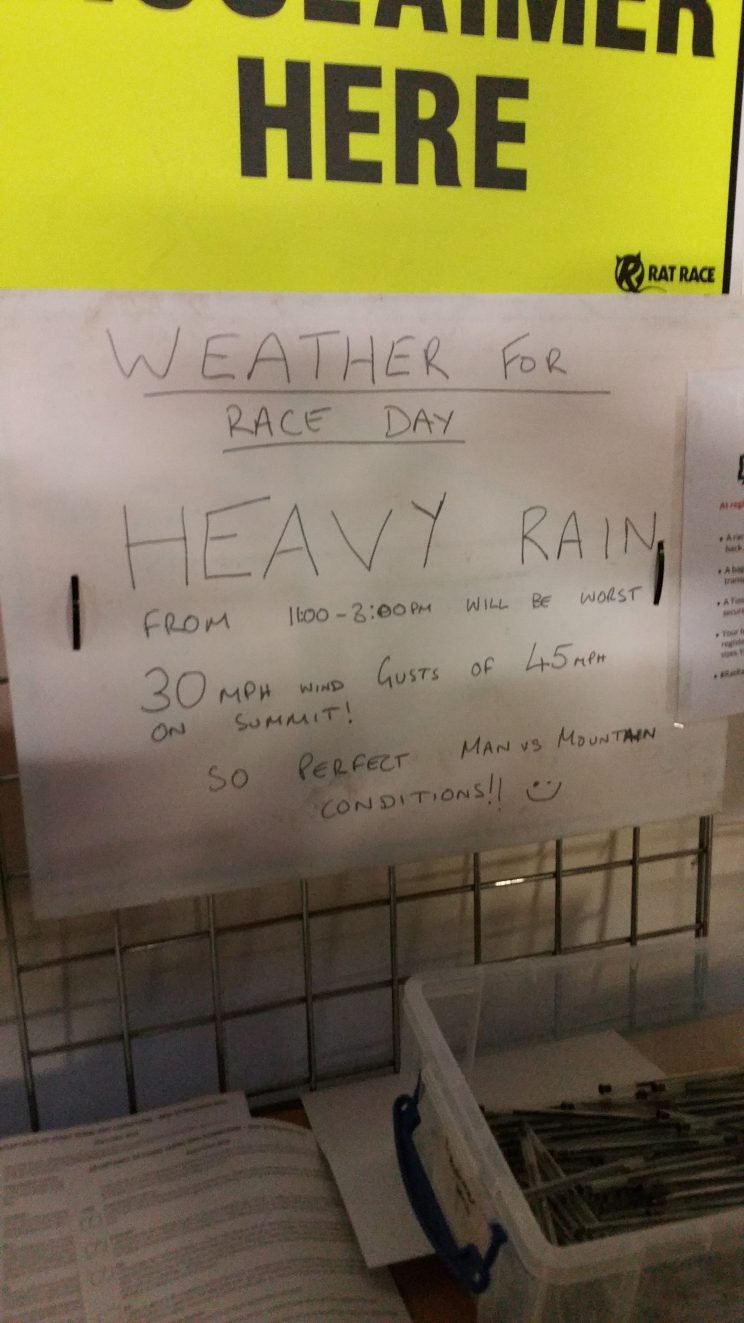 But, what’s a bit of rain and wind? It’s to be expected at an event like this, up Wales’ highest mountain, coming out of the summer months. We’d already been warned in the week leading up to the event that because of the weather, waterproof trousers would now be part of the mandatory kit. I’ll do another post on some of the tips for packing, as I struggled even the night before to get everything into one pack!

Kit check done, and back to the hotel for one last carb binge and leg roller stretch session. I think I managed to sleep for a couple of hours before the first alarm went off at 6am, when I was again greeted by further confirmation that Mother Nature was pissed. 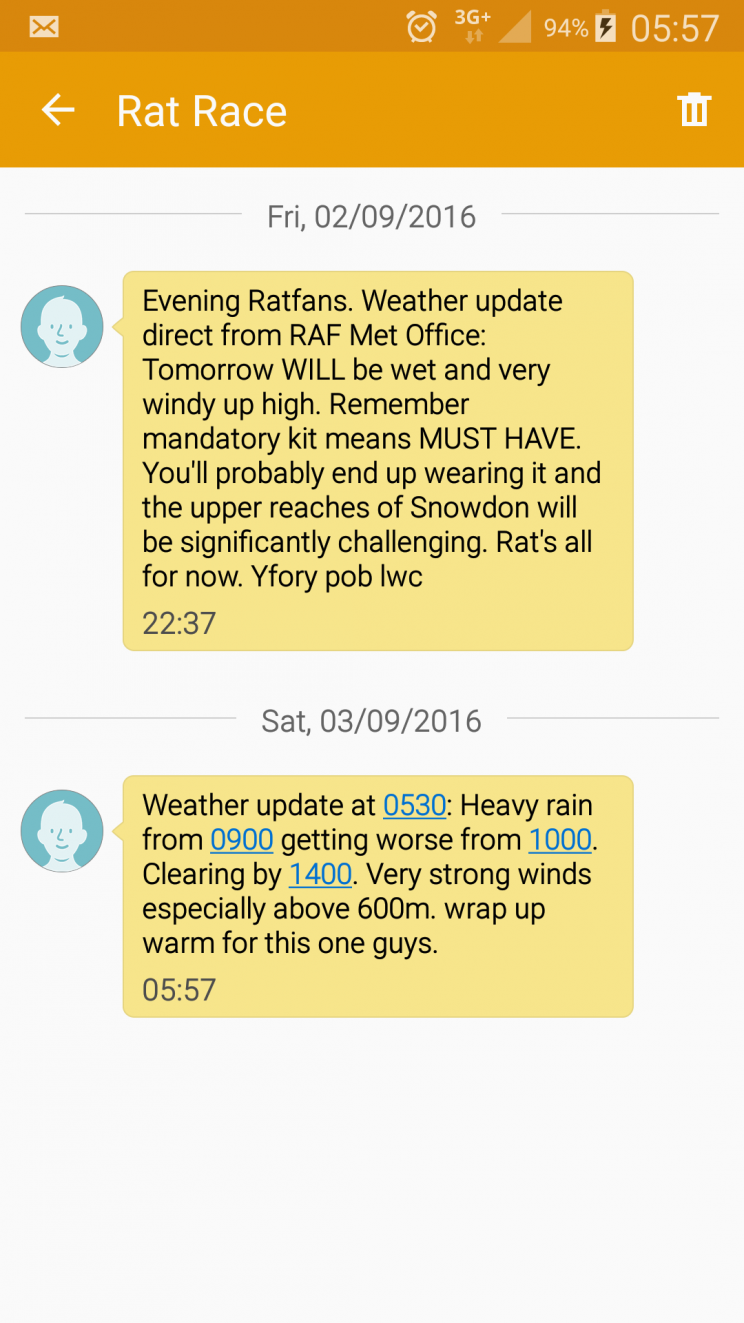 These are the kinds of moments that really challenge you. You can train all you want to do the distance, but you just have to try to be ready for when something comes out of the blue.

The atmosphere again at the start was fantastic. Everyone was encouraging each other, making jokes about the weather and helping to make final kit adjustments. Starting off inside the castle in Caernarfon added to the spectacle, even if it was a little cramped trying to get all the runners through the tiny entrance! 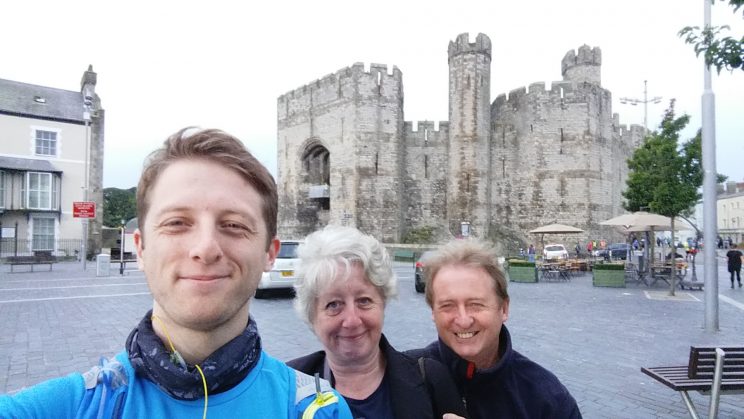 Obligatory pre-race selfie, with my official team photographers and supporters. Or ‘parents’ as they insist on being called.

The first couple of miles seemed to fly by. Aside from the odd stop to readjust the bag straps and take a quick sip, the training seemed to be paying off. The kit, the running playlist, food and gels – I was getting into a really good groove. Even when I started to get slight calf cramp, I managed to keep going and ended up pairing up with another runner next to me, acting as mutual pace setters for each other.

Each step, I was getting closer to the top. The hardest part at this point for me was just keeping my mind focussed, but relaxed. What was frustrating was making out the tiny, little coloured dots in the distance, running up the bigger hills. The dots being the ultra-master-immortal-demigod-pro-runners who are so far ahead it gives you that awful feeling of ‘I’m not going to get to that part of the race for another few hours’. But so what. I’m pretty much rank amateur at this scale and distance competition, but I just want to complete it for my own personal achievement.

The biggest mistake I think I made during the run was completely stopping at the first drinks point, at 8 miles in. The legendary Rat Race food/drink stalls didn’t disappoint – they had every kind of energy snack you could think of, and cups of tea! – but by stopping and queueing up, my legs were beginning to cool down. I’d occasionally jogged and walked in some of my longer distance training sessions, but I’d never completely stopped, so what made me do it during the run I have no idea. That, combined with being told by one of the marshals that the course would change, taking a new direction up to a different peak, and probably wouldn’t be the full 22 mile almost took the edge off of things too much.

Stopping completely was not one of my better judgements. For a good 20 minutes I’d been standing around in the rain, and I’d completely cooled down. I couldn’t get warm, and my calf muscles and feet were so tight that I could feel my toes stretching out through cramp.  I had to keep moving, even just at a light jog, and occasionally stop to stretch the calves, otherwise the pain would get worse and the next 10 miles uphill would be hell. Tip for anyone else wanting to do the race: don’t ever stop completely. Even if you’re walking, you’re still eating up the miles. Just keep going.

But on the new makeshift trail, everyone was so bunched up. It was pretty much single file, on a crazy, slippy trail with the ultra-pro runners flying past on the way down. At this point, just over 3 hours in, the weather really started to get rough. Out came the waterproof jackets and buffs.

I’d also never run on such undulating terrain in such wet conditions before, and as the trail got steeper and steeper, it turned more into a bouncing hike than a run, given the sheer runner traffic hurtling the other way, and the ground felt like ice.

Getting closer to the top, it got somewhat emotional if I’m honest. I’d spent months coming back from injury, getting myself into a routine, just for this moment. Granted, I couldn’t see most of the spectacular view! but to be there was such a relief.  What made the occasion extra special was what it represented.

For most of last year and at the start of 2016, I’d really struggled with stress and not feeling like I could relax. So what better way to relax than run up a mountain eh?!

It’s a long, boring emotional story (maybe post-worth?) but I’d found the training for this event, and events I generally train for each year, to be both challenging and therapeutic, and something to give me that release of tension.  The training was a constant. Whatever crazy stuff was happening in my work or personal life, this was something I could focus on and call mine,  …and get over any ‘mountain’ in my way. Bleurgh…that was pretty soppy wasn’t it? Ignore that. 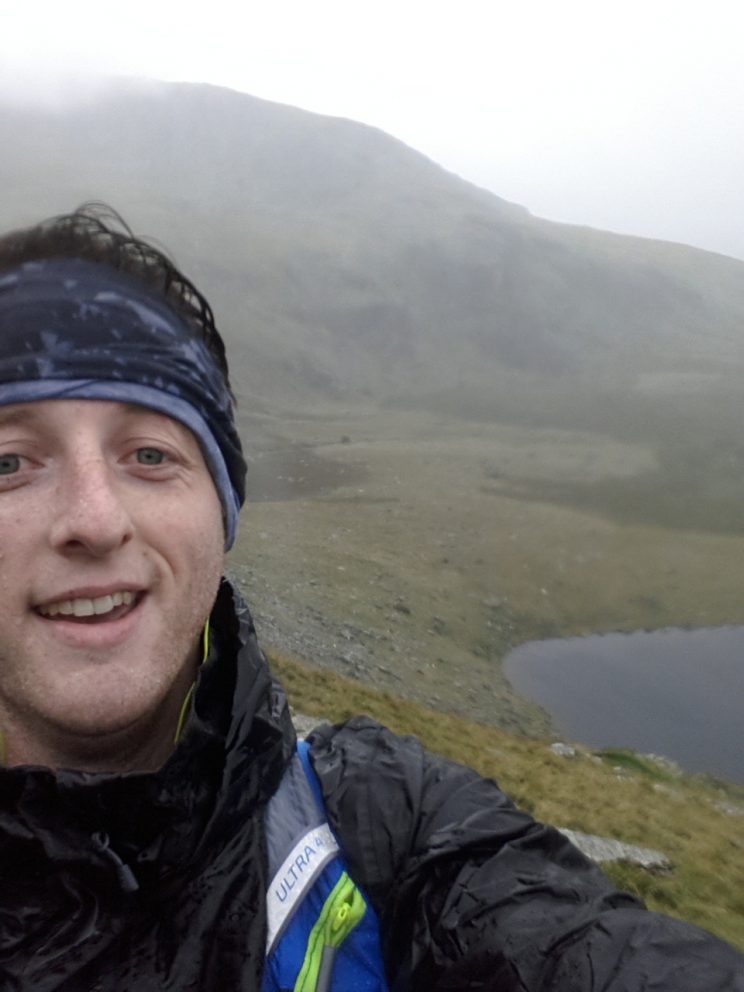 Selfie heading up to the summit. Knackered.