This was one of the stand-out activities on the Wild China itinerary for me when I was booking the trip. Googling some of the pictures and posts people have created after visiting this area, it looked like we’d get to see some spectacular views of the gorge and flowing Yangtze River below.

The route would see us split the activity over two days; with the bulk of the upward hiking on the first day, and then the descent on the second day, after a stopover at Tea Horse Guesthouse.

Trail: Combination of rock, dirt and cliff trails around waterfalls. 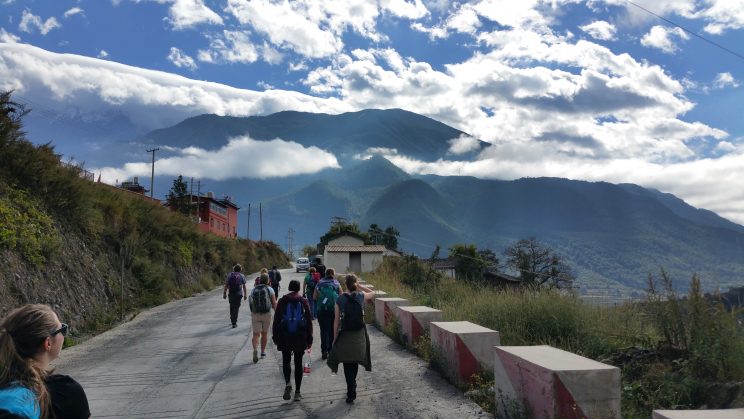 The official start of the trail

The first day got off to a bit of a mixed start start. My ankle was all taped up to keep it stable, and I’d promised myself to just take my time, and leave the crazy mountain goat antics to our new hiking guide, ‘Hi’, along with our trek guide, Jason.

Even now, I don’t know if ‘Hi’ was short for something, or it was just the generic western term given to him to make it easier for him to help us if we got in trouble (HI!…I’ve fallen over!).

The weather was pretty kind to us, after so many overcast and drizzly days before we got to Lijiang. We had beautiful clear skies for most of the day and sunshine, which after a couple of hours hiking, you do start to work up a bit of a sweat.

We started to walk up from the bus station after a 2 hour ride, over the newly created concrete road, heading uphill and I felt great. I was taking my time, taking in the sights, munching on my oreos. My ankle felt great and my confidence was high.

It was pretty much at that exact time I saw one of the girls in our group, directly in front of me, roll her ankle. She hit the deck straight away. It was like a horrible flashback being acted out directly in front of me! That would be most of the heavy walking over for her for today, and we hadn’t even got off the tarmac yet. So that didn’t do much for the personal confidence.

These type of injuries can happen to anyone, at anytime, but it’s even more frustrating when it happens to you 5 minutes into a 2 day hike! But to her credit she agreed to push on, and then decided, along with another guy in the group who was carrying a bad knee strain, to take donkeys up to the guest house.

The official start of the dirt trail was deceivingly steep as it zig-zags up to the first of many stop points. Jason made sure that we stopped every so often to take a drink, and with the sun out so much, get the sun cream on.  Starting off it does take a while to get into a stride, but at the same time it’s not a race – just take your time and enjoy the view.

That said, heading further up the trail we were regularly overtaken by Chinese hikers carrying huge rucksacks,  either with supplies for camping further up the mountain trail, or carrying giant bags of water bottles and souvenirs for tourists to buy closer at the photo points 5 miles ahead. 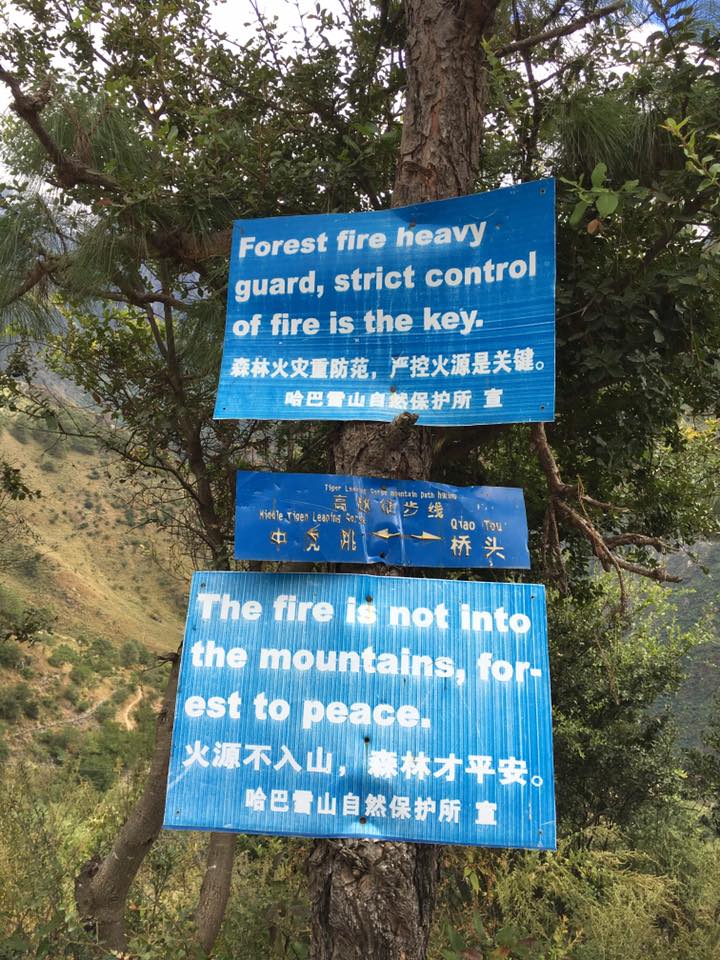 Some of the warning signs we came across were quite poetic, in a google-translate fail kinda way 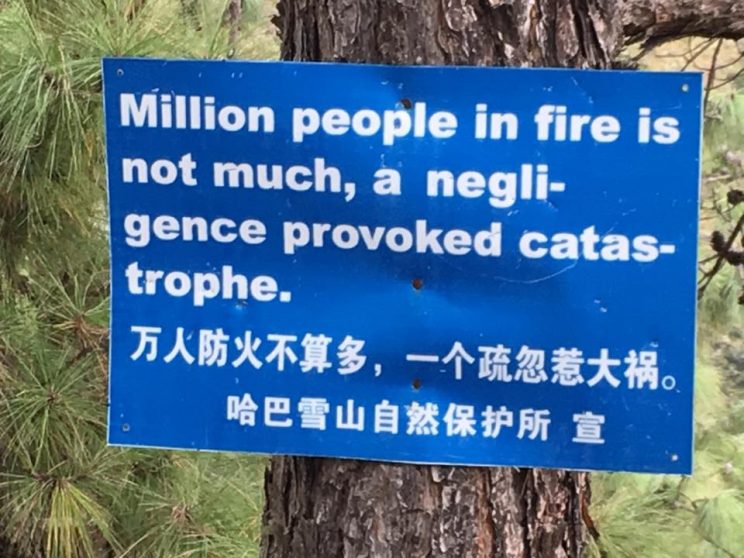 For a couple of days before the hike, Jason warned us about the biggest obstacle as it were on the trail – the 28 bends of Tiger Leaping Gorge. Maybe he was just trying to mess with us, but the way he talked about the, I pictured 28 long, cliff-edge slopes. The kind of slopes where you’re hugging the side of the mountain for dear life (think Stallone in Cliffhanger), with some raggedy old rope attached to your waist for safety. 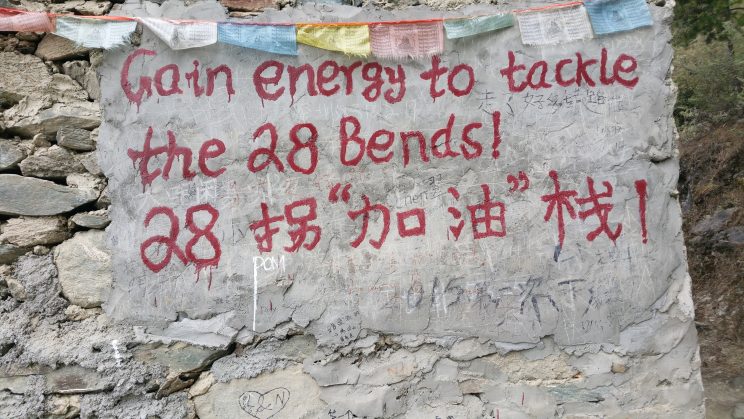 In reality, they’re totally the opposite. The 28 bends are more sharp turns that are close together, on a windy, steep pathway that does get a little precarious at times. Don’t get me wrong, they do get steep pretty quickly, and the ground is littered with loose rocks, but the bends are also really close together. So much so that we unknowingly did the first 4 in about a minute, at no great pace.

They’re definitely doable for all abilities, but on a wetter day I imagine they can be pretty slippy and unstable. Definitely make sure you’ve got a bit of tread on the boots. 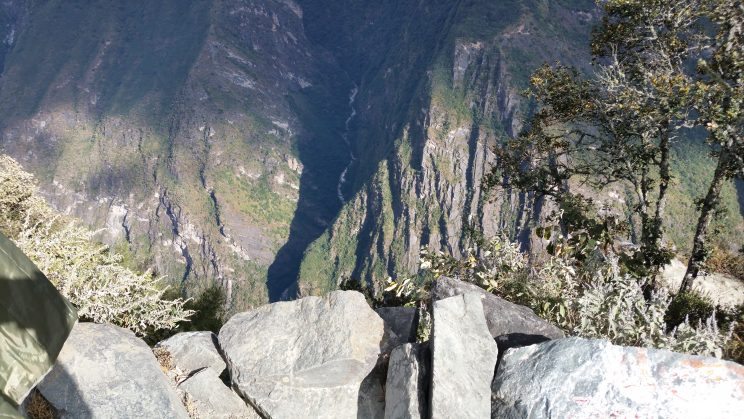 The ledge at the top of The 28 Bends

We reached the guesthouse about an hour before the sun started to go down, which gave us the perfect opportunity to have a beer on the roof viewing deck and take some great photos.

All the way on the trail, Jason kept trying to manage expectations, saying that the accommodation would be basic, and to not expect too much, and that going into the night it was get pretty cold.

Honestly? I have no idea what he was worrying about. It had everything you could possibly need after such an energetic day. The beds were pretty comfy and the showers were hot. The food was a little more expensive than some of the other places we’d visited, but its to be expected when there’s’ nothing much else around for miles!

Hi seemed to slip into his evening job as restaurant waiter/ entertainer, plating up and serving food and chatting to hikers. 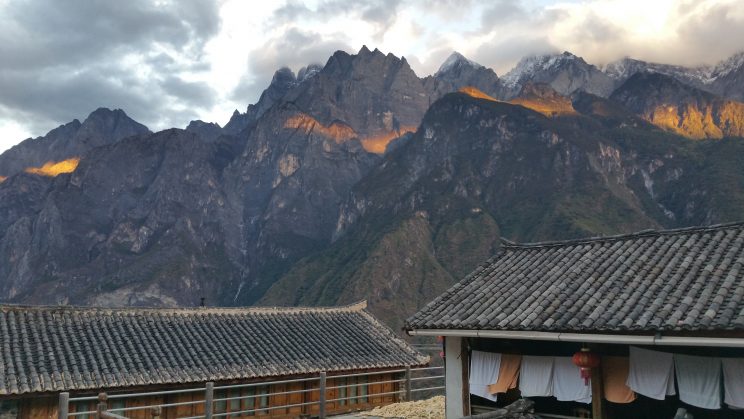 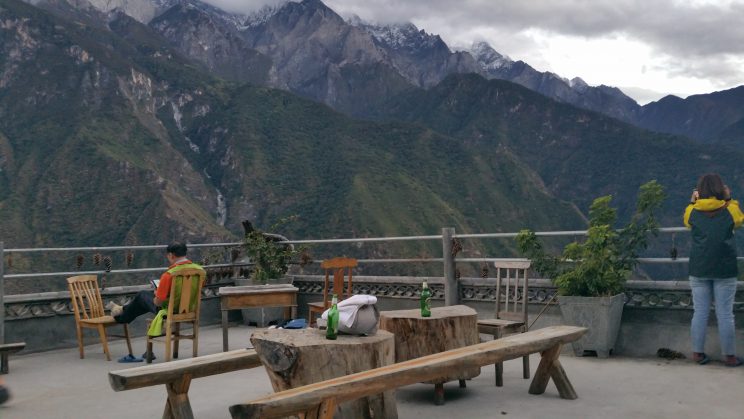 The best part of the evening was having a beer and relaxing on the viewing deck upstairs, looking at stunning view of the clear night sky. If you’re there and have a clear evening sky you have to check it out.

Overall the first day took us around 7 hours at a fairly steady pace to get to the guest house, which includes plenty of water breaks and a stop off for lunch.

The second day began with a bit of entertainment with Hi, this time playing the role of general handyman, breaking into mine and my roommates cabin with bolt cutters after our door lock seized up in the cold weather. 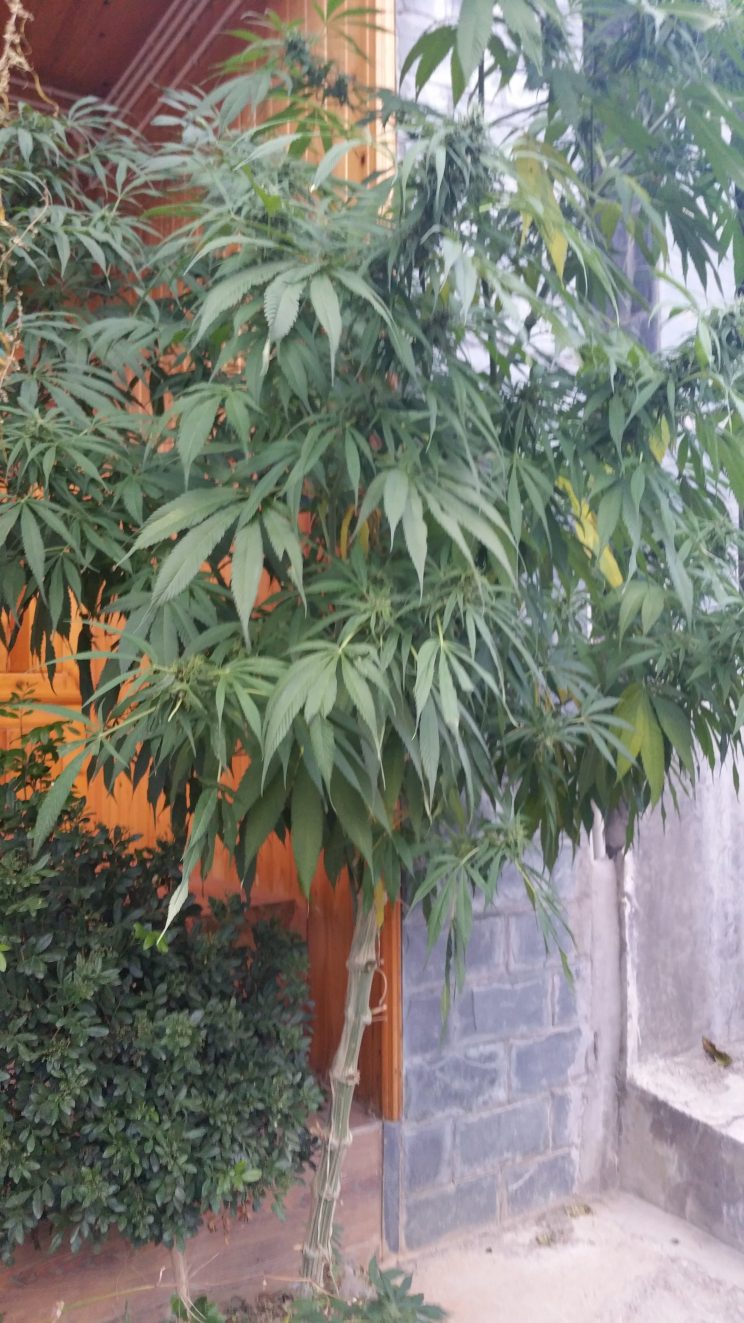 The local flora looked familiar…. OH! Maybe thats why they called him Hi?!

The trail leaving the guest house started off smooth, over newly made concrete roads. As we headed out you could see, even this far out in the middle of nowhere, the push to develop areas of the land and transport routes. Throughout our trip across mainland China we’d occasionally see development like this, with new roads and transport links heading straight through the winding mountains.

Hi would occasionally switch places with Jason to lead the hiking and set the pace. He was such a great personality to be around. Everything he did or said made you smile. For the two days we’d been hiking with him, he’d often shout ‘‘HALF WAY!’ to keep us going.

It seemed to work in boosting morale, but then when we’d figured he’d said it 6 times into a 2 hour walk we did suspect that maybe he was just missing us until… …well…we actually did come across a place called Half Way! 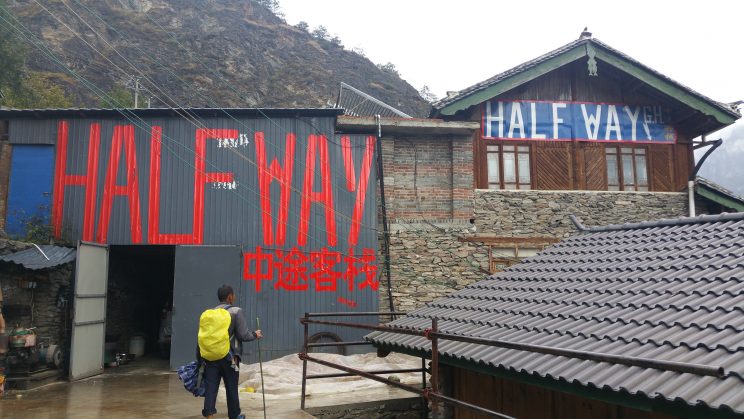 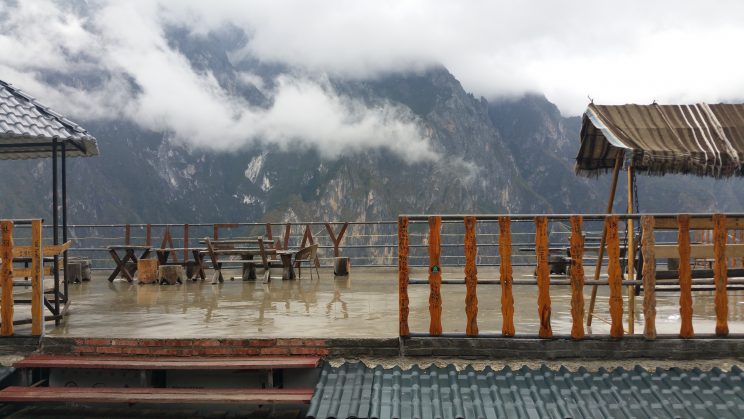 I wasn’t sure whether THE Michael Palin had stopped over, but after a quick search on trusty Wikipedia, he did apparently pass through these parts while filming his BBC series. 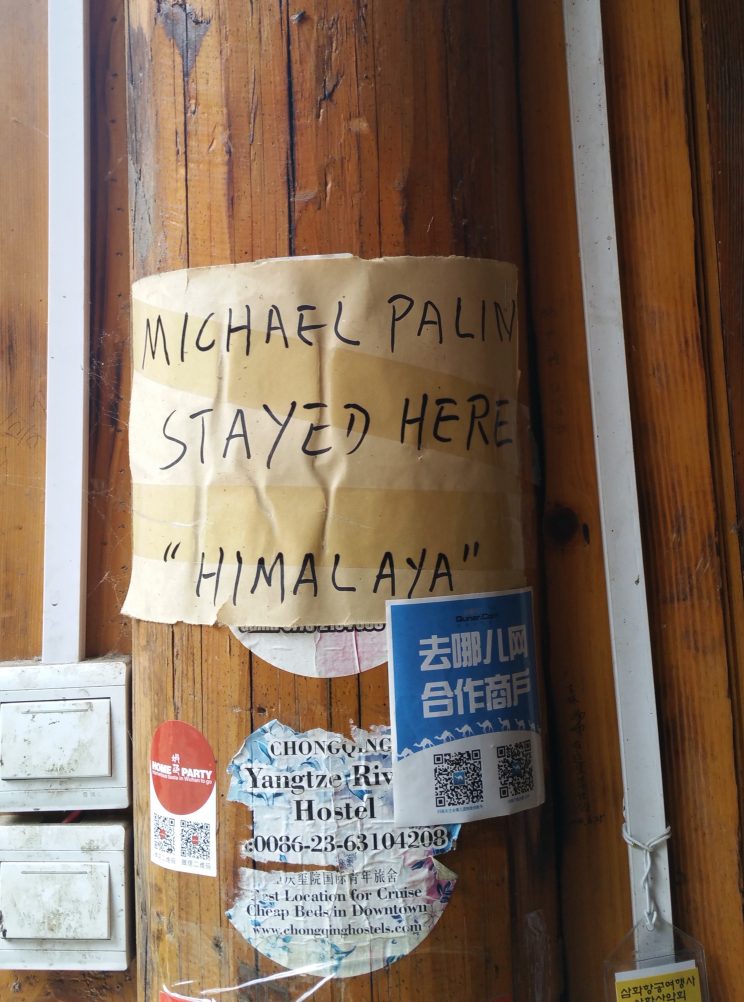 Growing up I was glued to the TV screen whenever Palin or Attenborough documentaries came on, and to have passed through the same trek as one of the greats is nice feeling.

I wonder what he thought of Hi.

We did start to get a little rain after lunch, which made some of the rockier trails slippy and pretty precarious to walk over. Naturally, Hi was happily strolling along like a mountain goat. At one point he took out his phone and started catching up on a couple of videos whilst the rest of us were paying close attention not to slip on wet rocks, or on the weirdly placed cables and huge water pipes coming off the top of the mountain. But then if you’ve done this trail countless times you know what to expect.

We did catch Hi a few times stopping to admire the fantastic views of the gorge. At one point he said something under his breath in Chinese, which sounds really beautiful. And then he completely changed the mood by howling like a wolf at the top of his voice. What a guy. 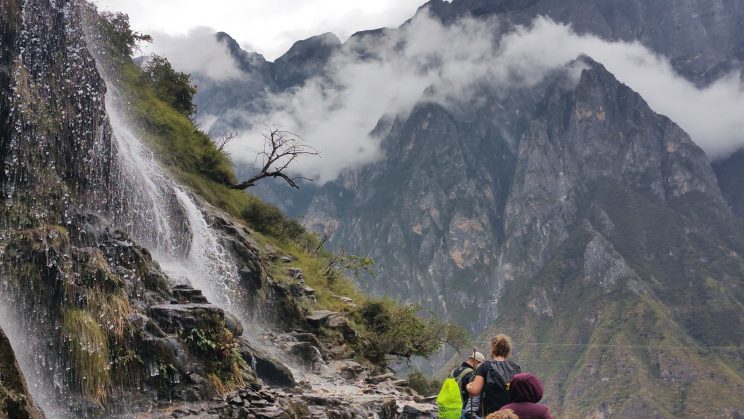 The descent on the second day took around 5 hours. The last few hundred metres were fairly steep, which is a real killer on the knees.  The end of the tail brought us to Tina’s bar, a guest house on the ridge over the river, were we rounded off the day with beers and noodles. 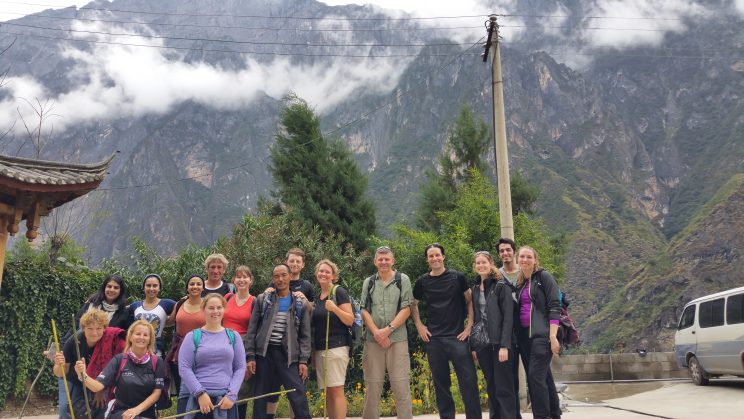 LetsGoStickyRice team all together, with Hi just in the middle, Tina’s bar

We’d clocked up over 23km for the two day hike, and my ankle was feeling great.  I loved every part of this hike, and it’d be great to revisit this place in future. Maybe with the running shoes next time.