The pics are pretty grim.

So after weeks of training, running through trails and up and down mountains unscathed, I’ve somehow managed to damage ligaments and crack part of my ankle on a leisurely Saturday morning jog.

The most annoying thing is that I was adamant about going for a run. I was due to go to a friend’s BBQ with my girlfriend, and I made a real point about trying to squeeze a run in early in the morning, before pigging out on beer and meat.

The horrible part was hearing the snap. Like a real loud crack noise – sort of like the sound of someone breaking celery sticks to make that bone breaking noise for films and games. It was loud enough for me to hear even with earphones in. I had just got to the bottom of a pavement slope in the park, and adjusted my shoes. I think that as I turned, I must have jumped, thinking I could get a good push off to head back up the hill, and all of my weight went onto my ankle at an awkward position. I hit the deck pretty hard, and cut my hands on the way down. For what felt like the longest few seconds ever, I actually thought I’d snapped either the ankle, or even the achilles.  What followed was some pretty liberal use of the F word, which got some attention from a few dog walkers in the distance.

But I figured that if I can wriggle my toes and put some kind of weight on it when I stand up it won’t be bone, but more likely ligament and muscle damage (runners logic?).   It was a pretty cold morning, and even with the compression gear on I knew that sitting down on the bench or floor for too long was the worst thing. If it locks up now it’s going to be much harder to get up.

I hobbled, feeling like a total idiot, embarrassingly back to the house and as soon as I got in and stripped off the tights and shoes, it was already starting to turn the loveliest shade of purple and black.

I remember one of the physios I saw for my knee injury last year (I’m accident prone) mention that you should apply the RICE method when it comes to any kind of injury – Rest, Ice, Compression and Elevation.

After changing I spent the rest of the morning icing every 20-30 minutes, taking pain killers and keeping it uncovered and elevated to let the swelling go down.

Now, I maybe should have listened to my girlfriend and gone to A&E or the drop-in centre that day, but I thought nothing off it and waited to see how it would be tomorrow. It wasn’t until the next morning when I couldn’t stand up properly after getting out of bed that I figured I’d probably done something bad.

Several scans and xrays later, and yup, confirmed – Grade II ankle roll, slight bone chip and bruised toes. It’s not as bad as it could have been, but that’s pretty much the end of running for the year with an 8-10 week layoff. What’s worrying me now though is that in 2 weeks I’m off to China for a month of hiking and cycling. BAH! 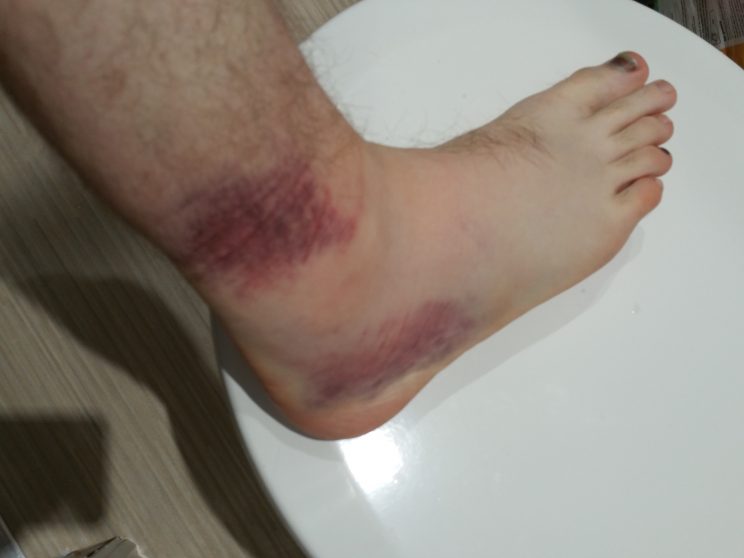 5 hours after rolling the ankle. Ewwwwwww.

The doctor who treated me was also a runner, and she was confident I’d be fine to walk unaided for China, I just had to stick with the snazzy ankle brace and have faith in the plan of plenty of rest, icing and then gradually starting to put weight on it and back to walking.

It’s sods law I guess. I start a blog about trail running and crazy endurance challenges , and then I mess my ankle up going for a stroll on the flat ground in the park. But, it’s a learning opportunity. It was a silly mistake but I know why it happened. In the time off it’ll give me a great chance to learn about balancing my stride, injury recovery, running mechanics, healing process. I’ll be fine. It just means having to sit still and rest :/

Sitting down and no strenuous exercise.  This blog is going to be fun!